Playing the songs and artists you grew up with

The music you’ll hear on Chippenham Hospital Radio is built around the songs and artists you may have listened to when growing up, we call it ‘Your Generation of Music’.

Take a look back through the decades to see the types of music we were dancing to, listening to and buying, all making up the soundtrack to our lives.

See if you can identify all the acts from each decade in the images, answers at the bottom! 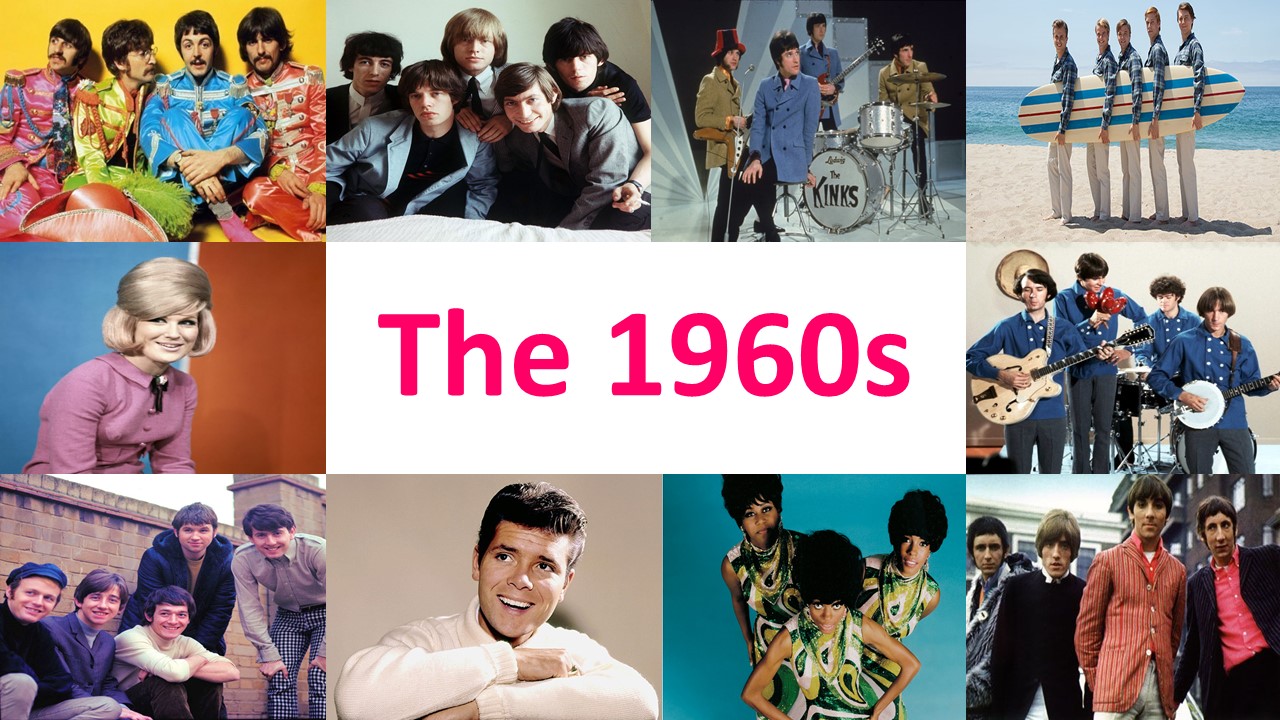 This was the decade that began with a whimper and ended with a bang.

It saw rock not only come of age but also become the pre-eminent cultural force, its impact and importance outstripping anything the worlds of fashion, film art and literature could muster.

Throughout the 1960s a number of scenes co-existed around the world, all of which would feed into each other to create a ‘Big Bang’ effect in youth culture.

In Southern California, the surf craze owed its soundtrack to Dick Dale, Jan & Dean and most importantly The Beach Boys.

The decade saw the birth of soul music, a mixture of gospel and rhythm and blues and it was Atlantic Records who championed this sound artists like James Brown, Ray Charles and Sam Cooke.

One of the biggest genres to emerge this decade was Tamala Motown. Set up by Berry Gordy Jr. in 1959 with a loan of $8,000. Taking its name from a Debbie Reynolds film ‘Tammy’ and Motor Town and using one of the most successful song writing teams ever in Holland, Dozier and Holland, they created worldwide hits for the likes of The Supremes, Four Tops, Marth & The Vandellas, Marvin Gaye and The Temptations.

But there was one band and one city in particular that stamped their mark indelibly on the world at large and fired the imagination – four lads from Liverpool by the name of The Beatles. Their influence on pop and rock was all-encompassing. Fellow Liverpool acts such as The Searchers, Gerry and the Pacemakers and Cilla Black led the way. Manchester provided the likes of The Hollies, Herman’s Hermits and Freddie & The Dreamers, Newcastle’s contribution was the tougher sound of The Animals, whilst Birmingham brought us The Move and The Moody Blues.

The Mods and Rockers, were a rebellious group of young men and women who favoured the latest fashions from Carnaby Street and Swinging London. Out of mod culture came some of the greatest rock bands of all time notably The Who, The Small Faces and The Kinks. 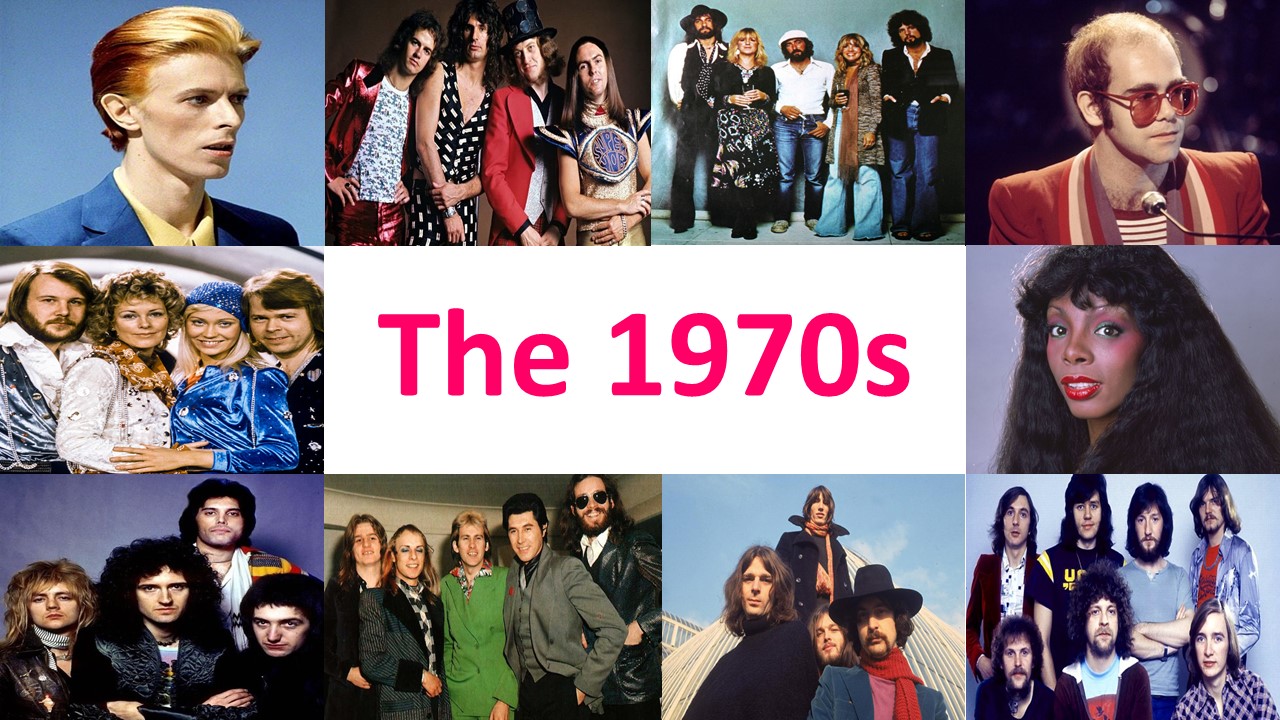 This was the decade that saw popular music turn into one of the biggest money-making industries, this despite oil crises and vinyl shortages. Promoters, record companies and acts realised their wildest dreams of fame and fortune as sales of records, concert tickets and associated merchandising went through the roof.

The early 1970s saw the rise of the singer/songwriter, especially in the US, with Joni Mitchell, Carole King, Jackson Browne, James Taylor and Carly Simon among those matching critical acclaim with high earnings. The UK would match them with Cat Stevens, Rod Stewart and Elton John – artists that had cut their teeth in the 1960s but became spokespeople for the new ‘me generation’, writing often very introspective songs from their own viewpoint and experience.

Progressive Rock, which took popular music into the realms of opera, classical and electronics also emerged in the early 70s with supergroups like Emerson, Lake & Palmer and Pink Floy, who’s 1973 album “Dark Side Of The Moon” as a top-seller. Other acts included Yes, Genesis, Jethro Tull, Queen and Mike Oldfield, who also had massive sales with his 1973 album “Tubular Bells”.

The decade also saw the emergence of Glam with acts like Slade, T.Rex and The Sweet leading the way with sequins, sparkle and satin.

Mascara, lipstick and sexual ambiguity became the order of the day and leading the charge was the chameleon like David Bowie. He toyed with different styles and personas as he went from rock through soul to electronica to become one of the biggest figures of the decade.

The 1970s was also very much the era of teenybopper pop with the likes of The Osmonds, The Bay City Rollers and David Essex. Swedish quartet ABBA left an indelible mark on the pop scene with a string of catchy, finely crafted tunes.

There was also the Punk explosion championed by The Sex Pistols and The Damned, there was new wave from the likes of Blondie The Boomtown Rats and Elvis Costello and Disco wrapped up the decade with Donna Summer, The Bee Gees and Chic big club classics. 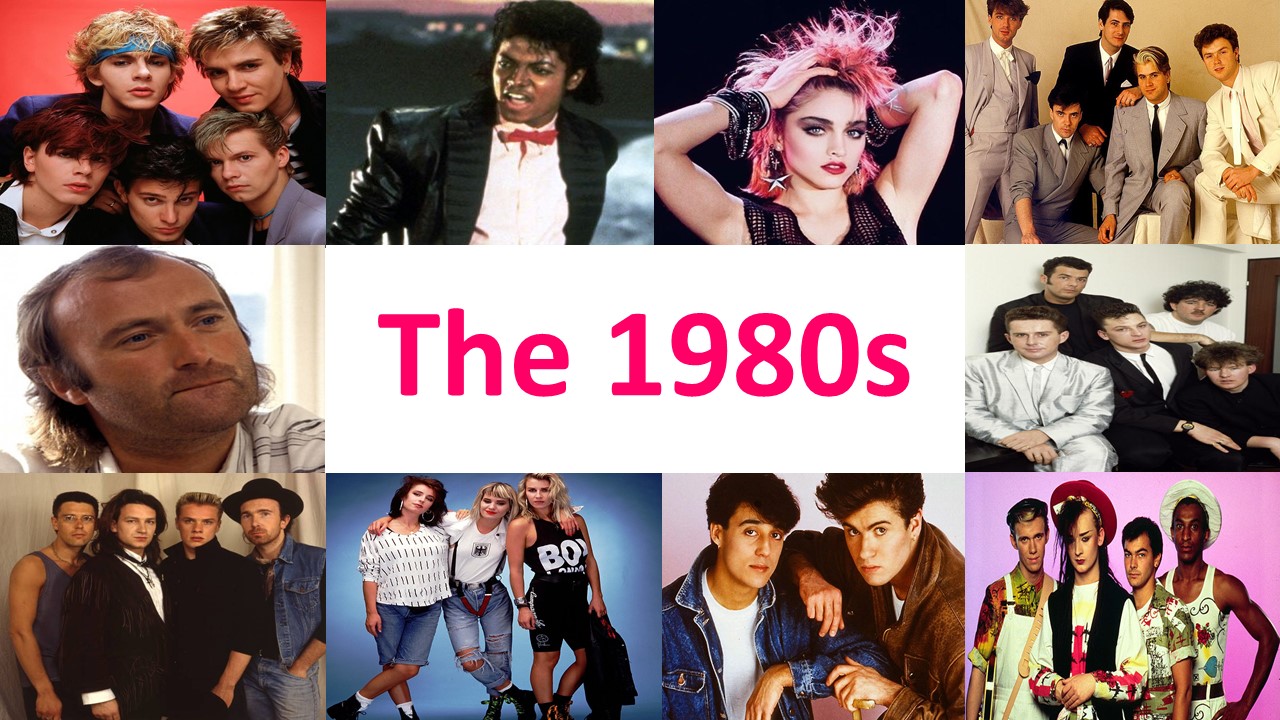 This was the decade when the impact of dance culture on rock and vice versa sometimes led to exciting results; it opened with “Thriller” and closed with the Manchester scene of Happy Mondays.

The 1980s started with a music sound that had seen a momentum in the late 1970s, that off New Wave. Groups like Duran Duran, Spandau Ballet, Adam & The Ants, Visage, Soft Cell, Human League and The Thompson Twins came to personify this sound.

The Synthesizer was the decade’s dominant sound, with many groups replacing guitars with synths.

The advent of MTV in 1981 and cable video helped spur what has been seen as a Second British Invasion in the early years of the decade, with British bands enjoying more success in America than they had since the height of the Beatles' popularity in the 1960s.

Madonna, Prince and Bruce Springsteen were some of the big names that emerged and enjoyed success on both sides of the Atlantic.

Britain’s biggest pop/dance star in the making was George Michael of Wham. He emerged from his group to find solo fame with a more adult brand of music, as did Sting when he left The Police to embark on a solo career. Phil Collins on the other hand managed to split his time successfully between Genesis and solo work.

The 1980s was arguably the decade when music rediscovered its conscious, with a number of charity songs making headlines themselves. It all started with Band Aid in 1984, the brainchild of Bob Geldof after viewing a BBC report on the desperate famine in Africa.

By the end of the decade a fragmentation has been observed, with many new forms of music and sub-cultures, including hip-hop and house music,  while the single charts were once again dominated by pop artists, now often associated with the Hi-NRG hit factory of Stock, Aitken & Waterman. The likes of Kylie Minogue, Jason Donovan, Sonia & Rick Astley.

The rise of the indierock scene was partly a response to this, and marked a shift away from the major music labels and towards the importance of local scenes like Madchester and subgenres, like gothic rock. 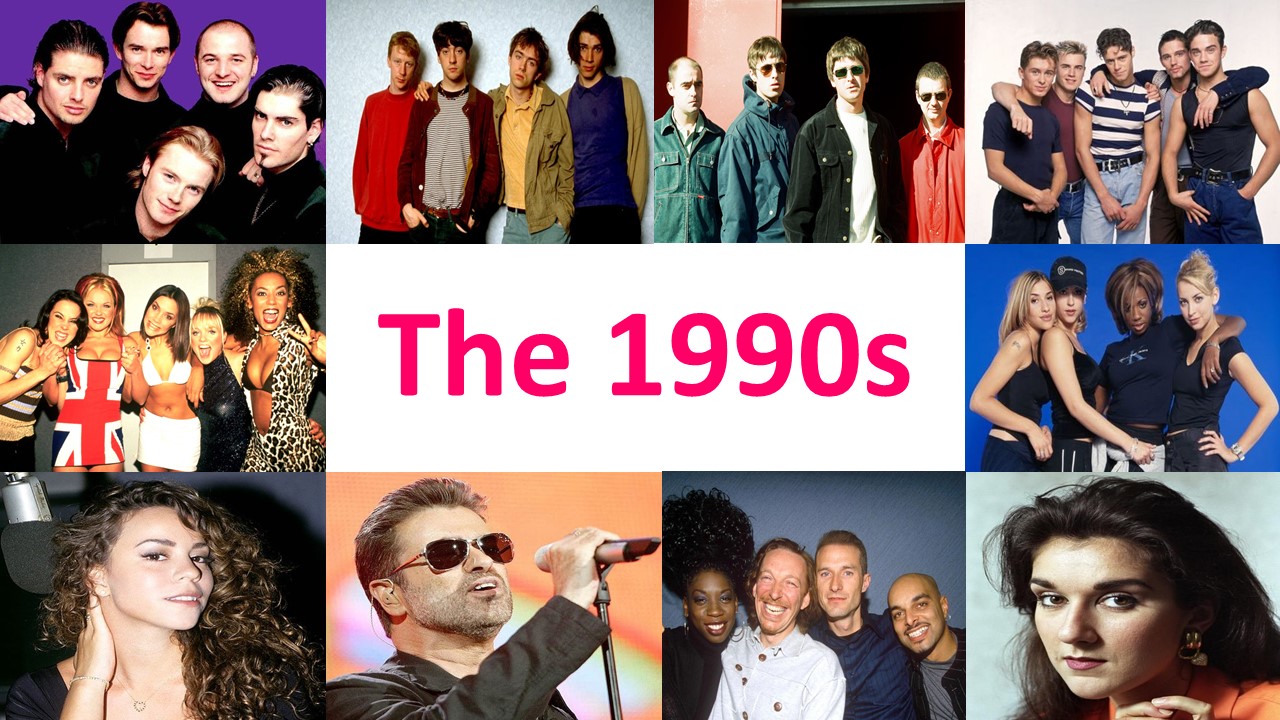 This was the decade or rapid change where musical acts weren’t known for their staying power, but the sheer variety of sounds and styles on offer reflected a society where diversity and tolerance were the buzzwords.

The now dominant influence of MTV made sure the emphasis remained on the visual, while the Brit-pop war in the mid-1990s saw Blur and Oasis deliver a much-needed kiss of life to a British music business already in a torpor.

The biggest selling girl group of all time launched their career in this decade. The Spice Girls were a manufactured pop phenomenon who provided their own brand of ‘Girl Power’ to the charts and went on to sell 85 million.

Solo acts Alanis Morissette, Robbie Williams, Bjork, Sheryl Crow and Celine Dion emerged to challenge the dominance of the groups – reinforced by the biggest crop of boy bands since the Osmonds and Jackson Five in the 1970s. Take That, Boyzone, Backstreet Boys and New Kids On The Block were some of the big hitters. 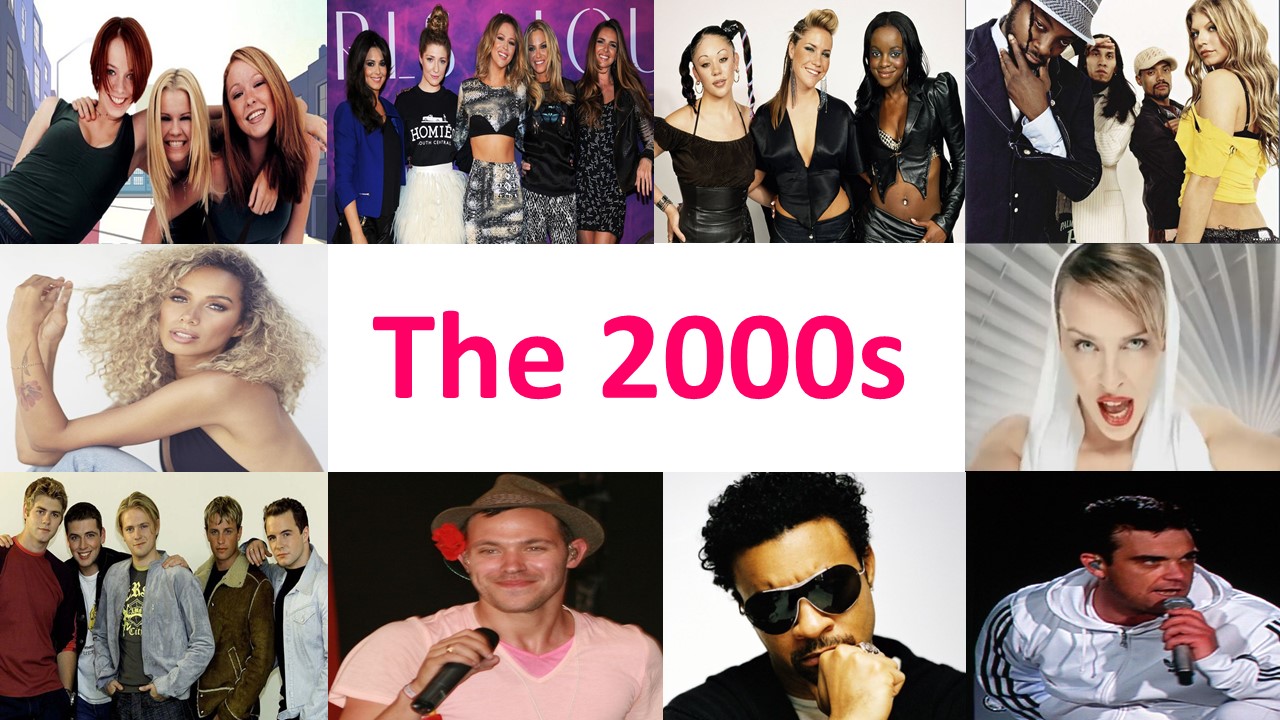 This was the decade that saw a quantum shift in how music was consumed as the personal computer became the new way to obtain music via downloading.

The internet made new stars this decade, The Artic Monkeys and Sandi Thom to name but two.

The 2000s saw a return to the 1960s in the form of manufactured pop groups. Talent shows like Pop Idol and The X-Factor were major forces in launching the careers of Hearsay, Girls Aloud, Will Young and One Direction.

British Soul maintained and even extended its high profile with the likes of Joss Stone, Estelle, Duffy and Adele, while a new group of singers/songwriters led by Amy Winehouse and Westlife achieved international success.

America offered us Britney Spears, Christina Aguillera and Pink, all having UK number ones.

New forms of dance music emerged, including grime & dubstep and there was also a revival of garage rock and post-punk, which when mixed with electronic music produced new rave.

Who’s in the Decade Galleries (clockwise)